Poul Erik Thyrring’s private house is an example of organic Brutalism. The “organic” links to the layout and the composite building structures. The “brutal” links to the use of the "raw” materials and the bared structure. The house represents a style that, with obstinate honesty, community spirit and closeness, also sets its clear fingerprint on prominent Danish “welfare building” . 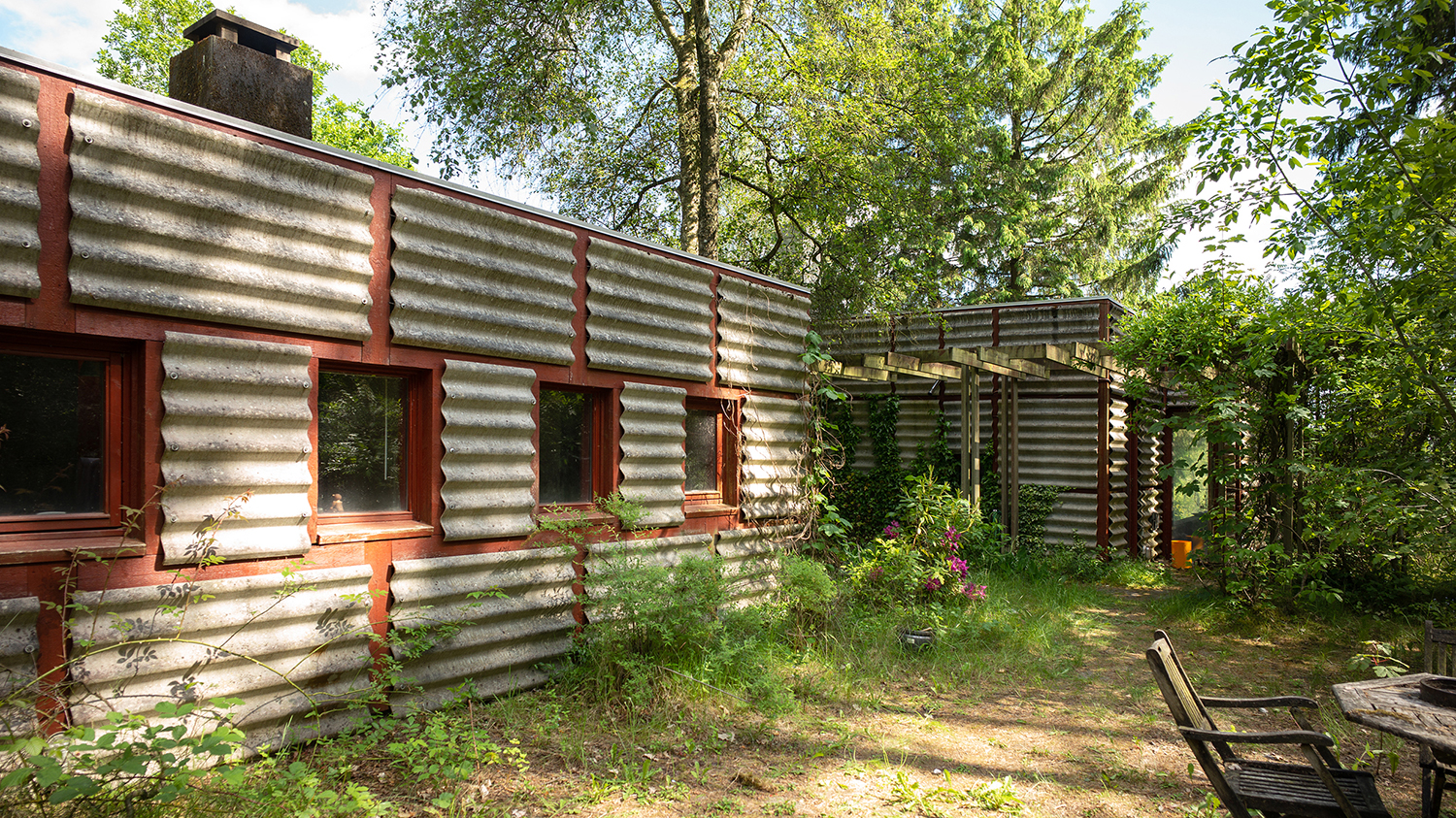 South of Herning, with a view to the Skjern Å river and Dalgaskanalen, stands Poul Erik Thyrring’s private house, built in 1969 as a summer-holiday home, and later becoming a year-round residence. The house is characterised by facades a consisting of a lattice of red-painted wood filled with grey, corrugated fibre-cement plates, clear composite building structures, and meticulous integration with the landscape. The house reflects the architecture that came to make its impression on the institutional buildings of the welfare state; an architecture of which Thyrring became a leading exponent: organic Brutalism.

Brutalism derives from the French beton brût, or raw concrete. This architectural style has made a deep impact on Danish building culture. Despite their sensuousness and honesty, Brutalist buildings are often hard to like and understand.

Poul Erik Thyrring worked in a community and for a community. Unlike some of his architect colleagues from previous generations, Thyrring was no doyen with “a name”. With works such as Panum in Copenhagen, the University of Copenhagen on Amager, KUMUA, the head office of Jydsk Grundejer Kreditforening in Herning, as well as the Customs Agency in Copenhagen, Poul Erik Thyrring and the architects Nils and Eva Koppel and Gert Edstrand set a course for Danish architecture in the Post-War period.

Exposed, raw and obstinate, but also textural, honest and community-oriented. Poul Erik Thyrring’s private house represents Brutalism. The style is from the mid-twentieth century, and it is almost insistent in its concentration on rawness and love of the exposed. Brutalism is derived from the French beton brût, meaning raw concrete. Brutalist works are heavy, imposing and linked to a time when a socialist agenda ruled in intellectual circles. With Poul Erik Thyrring and like-minded people, a more organic Brutalism emerged, which managed to embrace site-specific elements and set a human agenda in the mega-constructions of the welfare state. Just as Arne Jacobsen and other Modernists transformed international Modernism to a more Danish version with saddle roofs and brickwork.

Poul Erik Thyrring’s private house is neither pretty nor luxurious, but there is a particular inherent aesthetic in the corrugated concrete walls with visible impressions of shuttering boards. There is a clear and easy-to-read rhythm in the red-painted latticework on the facades; an honesty in the use of materials such as the raw corrugated fibre-cement plates on the facades, and the tongue-and-groove boards on the ceilings. Furthermore, the uninhibited transitions between the kitchen and living room and the door curtains reveal a desire for community. The house does not just relate to the human scale: it is also meticulously incorporated into the landscape on the large site.

Realdania By & Byg purchased the house to secure an example of an attitude and an approach to building that is essential for the narrative of Danish architecture and understanding of the built environment around us. After restoration, the house will be let as a private dwelling.